Al Dente Writing: To the Teeth or a Little Chewy? 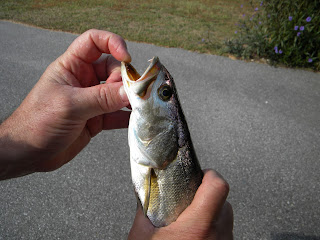 Speckled Trout (Speck), October 30, 2010
﻿Would you believe that it has been seven score and seven (147) years ago since Abraham Lincoln delivered the Gettysburg Address? I decided to keep track of important dates in history so I subscribe to History.com and get daily e-mail updates. It's hard to believe that in this day and age--or any age for that matter--people could actually get writer's block and not be able to come up with something to write about. How is that possible? A fellow blogger and gardening mentor, TC, The Write Gardener, recently asked his faithful readers for some help with his problem of writer's block. Of course, he was referring to something very specific, which was coming up with 52 articles for a weekly gardening column in a newspaper. In case you haven't noticed, I don't write professionally, and I keep my blog open to many different topics. It's amazing that my gardening friends still like to visit here. I guess they don't hold it against me that I have a serious problem: too many ideas begging to be set free. And then there's the other problem of what form they will take. What subjects will they broach? (That's an interesting word, by the way) Politics? Nature? Fishing? Gardening? Even when I do settle on one topic--or more--the words I choose to describe it/them might seem a little chewy. Kind of like conch. It goes all over the place in your mouth but isn't easily swallowed.

I blame it--the writing, not the conch--on growing up with card catalogs in the library and an unabridged dictionary in the form of a book. I would start out looking at one thing and end up discovering something completely different. The Internet is okay, I guess, as a research tool, but it just isn't the same thing. Blogging is probably the next best thing to a card catalog. Take a look at my Blog List, and you will understand what I mean. Don't stop there, though. Take the time to read a few of the posts I've linked to (don't forget to leave comments) and then come back and read some more. Don't stop there. If you've already got a blog, link to the blogs you like. If you don't have one, what are you waiting for?

I don't normally look to Wikipedia for information about a subject, but this article is the most comprehensive and interesting one I've found about Lincoln's famous speech. He wrote it himself, and there are several different versions or drafts in existence, as well as firsthand accounts written down as the words were spoken. Just imagine: there were no recording devices available then besides a pen and paper. So much has changed and yet so little since those words came from the mouth of a famous Republican President. It wasn't so highly regarded then, as his political opponents were eager for him to be booted out of office. The Peace Democrats, known as "Copperheads," were deadset against the military draft that Lincoln had instituted earlier that year so that the fallen soldiers could be replaced with fresh ones. They wanted an end to the war and were willing to make concessions to the Confederacy to make it happen. Lincoln wrote and made that short and to the point speech to make it perfectly clear why our country was fighting the Civil War. I think he did a dandy job of it. It was most definitely "to the teeth."
Posted by walk2write at 15:54