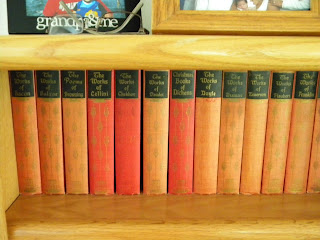 The poorest experience is rich enough for all the purposes of expressing thought. Why covet a knowledge of new facts? Day and night, house and garden, a few books, a few actions, serve us as well as would all trades and all spectacles. We are far from having exhausted the significance of the few symbols we use. We can come to use them yet with a terrible simplicity. It does not need that a poem should be long. Every word was once a poem. Every new relation is a new word... (Ralph Waldo Emerson, Essays, "The Poet, 1844")
Yesterday morning we visited a church we had never been to before. We've passed by it many times in the past year as we travel back and forth between Tallahassee and Havana and wondered what sort of place it might be. The church website doesn't give much indication of its nature. In fact, it doesn't make much sense. You would think that if some entity is trying to make itself known to the world, it would use some elegance of expression or at least clearly describe its mission or purpose for being. Maybe their Facebook page does a better job. I'm not sure because I don't use that particular social medium. A blog and a Twitter account already occupy too much of my time!
At any rate, upon our visit to the church that offers new hope--what's wrong with the old one, I'd like to know?--we discovered the members of the congregation to be friendly enough (and wonderfully diverse), the sermon enlightening (if a little too emphatically delivered), and the music uplifting. Though we may not be going back, I'm glad that we did make the effort. The whole experience was just what I needed to fine tune a story that I had written very early in the morning. It sharpened the knife, so to speak, that trimmed the fat and carved the roast, I mean the story, to be served up for your dining, I mean reading, pleasure. Please help yourself here in my other kitchen (Big Bend Over Easy in Florida) and enjoy our Sunday leftovers!
Posted by walk2write at 08:54 9 comments: Links to this post 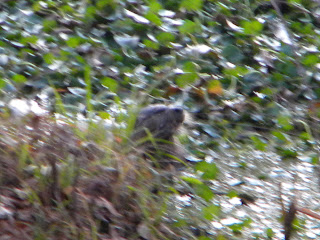 Once in a while it's nice to get off this speeding bullet train called life. From the back porch of our temporary home, the lakeside tree house, we witness progress of a different sort. What we think might be a northern river otter, Lutra canadensis, pops its head up from the muck and chomps noisily on some crunchy morsel. A fish made sluggish by the cold winter water or perhaps a frog venturing forth from the cold mud becomes supper for this member of the weasel family. As I try unsuccessfully to capture it in focus on the camera, I think about the trappers and fur traders who once made a substantial income from its ancestors' hides.
Beavers, otters, muskrats, and minks were at one time so popular as winter outerwear for wealthy Europeans that our own Congress under President George Washington agreed to subsidize the fabulously profitable fur industry. Something unthinkable today, this subsidy encouraged the slaughter of thousands of animals for the sake of a fashion statement. Thank goodness that was short-lived, the fashion I mean. Subsidies continue in perpetuity even though entrepreneurs like John Jacob Astor proved without a doubt that private industry prevails over the lumbering giant known as Government. Just about anything you can think of in this country is subsidized in part or in its entirety by tax dollars: Education, healthcare, ethanol production, farming, ranching, solar power, wind power, oil and gas production, churches.... Help me out here. I know there are more things to add to the list.
Aristocracy never really disappeared from this country. It just morphed into elitism that preys on sluggish minds: We know what's good for you. We must continue those subsidies, or else!
There is something so massive, stable, and almost irresistibly imposing, in the exterior presentment of established rank and great possessions, that their very existence seems to give them a right to exist; at least, so excellent a counterfeit of right, that few poor and humble men have moral force enough to question it, even in their secret minds. Such is the case now, after so many ancient prejudices have been overthrown; and it was far more so in ante-revolutionary days, when the aristocracy could venture to be proud, and the low were content to be abased....
Nathaniel Hawthorne, The House of the Seven Gables, 1851
Posted by walk2write at 15:47 13 comments: Links to this post