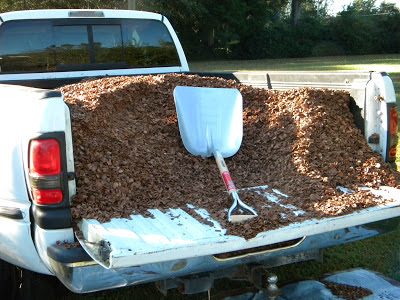 On my way home from attending a class at UWF last Friday afternoon, my cell phone rang. It was a call from SAM.

"Guess what, honey? I have a surprise for you. It's something we've been wanting for a long time!"

What could it be? I wondered. A million dollars? Another grandchild on the way? No, there was something even more special waiting for me when I got home. It was a truck-bed full of pecan shells from the Renfroe Pecan Company. Can you believe it?

I rubbed my eyes because I had trouble believing what I was seeing. We were told earlier this year by the nice young man with the pecan-shell-mulch ad on Craigslist that he had an exclusive contract with the company to pick up their spent shells. So how did SAM finagle a truckload of the stuff? FOR FREE? Well, it turns out that the nice young man must have prevaricated. He stretched the truth. He told a fib. There was no contract with the company, and anyone can pick up a load of pecan shells.

Of course, lying comes so naturally to the human race, especially when money is at stake. Or witches, for that matter. Huh? You'll have to forgive me. Halloween is next week, there's a presidential election the week after, and I've been reading Mark Twain's account of The Mysterious Stranger. Or was it his biographer's account? There is a dispute over who really wrote the tale, and that's probably as it should be. As it turns out, the mysterious stranger is the Great Prevaricator, the Father of Lies, known in one version of the story as No. 44. 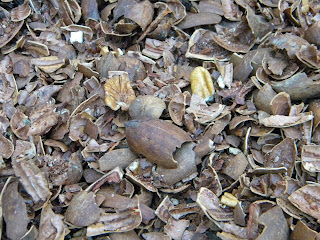 Once we got over the shock of being "misled" (it sounds so negative to call it being lied to), we were delighted to find nuts in the mix. Lots of them in fact. Five pounds (about $45 worth if purchased at the grocery store) at least by my reckoning. I have to wonder why there were none in the previous load from the pecan-shell guy. It took us a while to sort through this pile. The neighbors were sure staring, but we were past caring. 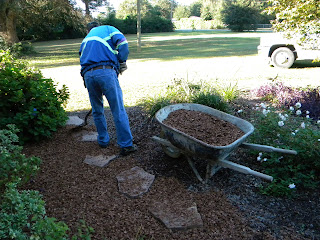 The nut pile was growing, but spreading of shells sure was slowing. Wait! I thought. Grandson is coming over for a visit. We will offer him the chance to help. And he did, quite willingly. As a reward, Grandpa SAM offered him the choice between a stack of five quarters and a crisp dollar bill for his efforts on finding more nuts.

He's pretty sharp, that one: another good knife in the drawer, a chip off the old block, or a nut that didn't fall far from the tree. SAM said his great-grandpa would have been delighted with him. 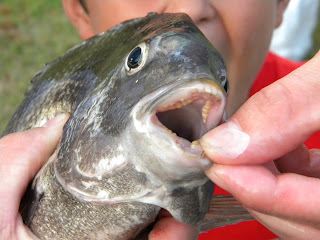 Getting back to Mark Twain's story setting of Eseldorf ("ass-ville"), I have to wonder why there was nothing like a good fish story in the midst of it. Animals did play a big part. A faithful dog and a magic cat were presented but no fish. Well, except for the ones that kept multiplying in the frying pan when unexpected company showed up for dinner. That's even better than a whopper of a story about the fish that got away. Or trying to convince someone that some fish have teeth like we do. Yes, sheepshead have human-like teeth. Or do we have sheepshead-like teeth? If Darwin's theory is correct, then the fish were here first, right? Humans came much later. If only fish could talk. I'm sure they wouldn't lie. They have no Moral Sense. Strange. That's what kept getting Twain's Eseldorf-ians in trouble. It should be what keeps us out of trouble.
Posted by walk2write at 07:25 17 comments: Links to this post

Secret Aging Man and I were on our way to work for him and a family visit for me when I saw the sign. "Dixon Springs State Park." We weren't far from the border between Kentucky and Illinois. "I just have to see it again," I said. What age deletes from my memory, Southern Illinois replaces. Leaving Interstate 24 for a two-lane highway, SAM in the driver's seat, I leaned forward with anticipation. Would I find the place just as I had left it that summer in high school? Of course not! I've been back to it since then, the summer I took a field botany course and learned more about human nature than Nature nature.

Certainly, the contours of the land were the same, not much different there. And silly rules were still posted: a "No Swimming" sign in the very place where swimming would seem most appropriate--the catch-basin for a natural spring.

The cabins were there or at least they were standing. A "Dead End" sign seemed more than appropriate for them now.


The cabins' window-blinds were sagging and wrinkled like the lids on an old woman's eyes--hey, I'm beginning to resemble that remark. No signs of recent life appeared. Still, I thought I heard the ghosts of loud whispers and giggles from girls sneaking over to the boys' cabin in the middle of the night. Rules and raging hormones somehow cannot coexist in the mind of a teenager. Our teacher, Mr. R, surely must have known that nothing short of a barb-wire fence surrounded by punji stakes could separate the girls from the boys at the end of a week-long field trip away from parental supervision. Back then, I guess school authorities and parents giving their permission were fairly naive about such things. Mr. R and his 18-year-old daughter were our only chaperones for the trip.

Nothing "naughty" happened, of course. I think the presence of old church buildings in the park must have made some impression on a group of youngsters raised in the Heartland or Buckle of the Bible Belt. Or it could have been the fact that none of us trusted Mr. R's daughter to keep her mouth shut about our shenanigans. She was nice, but none of us really knew her. We were high school freshmen, and she had just graduated high school. She was officially a "grup" and apparently wise in matters of the heart. She already had a steady boyfriend. We were newbies on that scene.

Considering the present state of Illinois' economy, the park's condition wasn't too shabby. But I did find the lack of signs about the park's history somewhat shameful. Who, for instance, built this wall?

And what was the origin of this ancient well at which SAM is pointing his finger? Was it the foundation of a bath house? The state website link at the beginning of this post indicates that 19th century visitors to the area used to bathe in the mineral springs for health reasons.

Maybe a better question is why don't we utilize our state parks for similar purposes today? Why did traditional forms of therapy such as hydrotherapy and massage therapy fall out of favor with people interested in maintaining good health?


Thank goodness the end of the week-long trip that SAM and I made wasn't plagued by unanswered questions or shrouded by the mists of time and fading memory. We stopped on our way home to visit a gardening friend, one I'm sure that many of my visitors are familiar with: Tina of In the Garden fame.


She and Mr. Fix-It had an answer for every question, a wonderful supper for hungry guests, and warm hospitality for visitors who forgot how cold Tennessee weather can be in early October.


And of course, they had plants to share: asters, irises, cannas, and variegated Miscanthus.


I hope we can repay their kindness someday soon. It's been nearly four years since our last meeting in New Harmony, Indiana. I pray it's not so long until the next one.