On Sunday morning of this Memorial Day Weekend, 2013, we were honored to witness something very special. A decorated Colonel in the United States Marine Corps offered his blessing over one of our own church members, our pastor's youngest daughter, who is leaving soon to join an elite group of men and women at the Marine Officers' Candidate School in Virginia. I know that she is well-prepared for this, perhaps the greatest challenge in her life. Brought up with proper discipline and belief in Jesus's unconditional love to keep her steady, she has for many years shared a special gift of music and faith with us. She is not afraid to use her hands (enemy combatants be forewarned!) as she leads us in worship, strumming the guitar and our hearts with her fingers, singing every Sunday, barefoot in the presence of God.

May God bless her and keep this wonderful country, the United States of America, safe and free, forever and ever. Semper fidelis. Amen.
Posted by walk2write at 00:11 7 comments: Links to this post

Land of Milk and Honey Again

I know that pictures usually tell the story on this blog, but this time I will let the words do it. And there's not a word of truth in them, or at least I hope there's not...

Land of Milk and Honey Again

Email ThisBlogThis!Share to TwitterShare to FacebookShare to Pinterest
Labels: Fiction versus Nonfiction, Land of Milk and Honey Again, LOMAHA, Writing

Mars to Men: If You Think Venus is Hot, Try Gardening in Florida!

It is only the middle of May, but things are already heating up in the garden. It certainly is, if you garden in Florida. Gardening in Pompeii must have been a little steamy, so it's no wonder that Mars figures prominently in the buff in a wall mural that survived the volcanic devastation. Now why would Mars, Roman god of war, look so at ease, leaning on his spear instead of aiming it, perched on a pedestal in the middle of a garden? Did he get fed up with his image as war-monger? More likely, someone on the home front who was thoroughly tired of war (aren't we all?) decided to promote him as having another set of skills, if not as gardener then at least as garden-guardian. After all, why should any self-respecting god be pigeon-holed? He deserves an avocation like anyone else. Gardening is as good a one as any.

SAM my man even lends his hands and strong back in the garden. He has graciously agreed to arrange many, heavy blocks so that I can convert my veggie growing spot to a new, almost completely containerized version of it. So far, I have grown peas and lettuce (both of which are almost finished for the season), tomatoes and peppers, as well as herbs. With Cliff's Organic Wonder Soil as a growing medium, the plants have been performing wonderfully, as expected. Am I crazy for putting so much confidence in dirt? Call it Mars Madness.

I was confident enough in Cliff's soil to purchase a very expensive tomato plant at a nearby nursery. You would cringe if I told you how much it cost. We'll just say that it probably cost more than I paid for a whole bushel of tomatoes a few years ago. If you think I'm foolish, then blame it on Mars. He's not afraid of anything, so why should I be?


Here is the first fruit of that Early Girl. Pretty, ain't she? Pay no attention to the hair on her legs. She's not old enough to shave yet.


I did not pay too much for some pepper plants, which were purchased at one of the big box stores. This one is a red-hot cherry pepper. Only two plants were bought and planted because a little goes a long way with hot peppers. SAM is not overly fond of spicy food, so I may end up giving away quite a few of these peppers.

Lest you think me scandalously "squanderous," I will say that I grew lettuce and peas from seed early this spring. It's easy and cheap to do so.

It's also easy and cheap (free!) to grow pass-along plants like this NOID daylily. One of my massage clients who also likes to garden gave me some of her excess plant divisions. She didn't name it so I will call it Flame(n) Martialis. It does look rather priestly. You can imagine it brandishing its spears (stamens) to ward off any potential enemies of the garden veggies--garden-guardianship at its best.


Speaking of garden-guardians, a kitty that's been hanging around our garden for several weeks has a new name--Mars. It's a NOID, bob-tail cat that seems rather sad and waits patiently to be fed twice a day now. At first, he (at least I think it's a he--I haven't been allowed to lift up his bob-tail to make sure) would only come around once or twice a week. We're thinking that someone nearby moved away and left him to fend for himself. He's welcome here anyway. We can use all the help we can get with guarding the garden.
Posted by walk2write at 15:14 12 comments: Links to this post

What is the Grass? 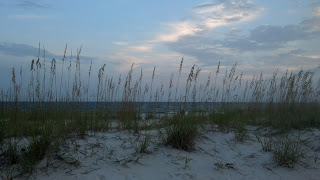 "A child said, What is the grass? fetching it to me with full hands;
How could I answer the child?....I do not know what it is any more than
he..." (from Walt Whitman's Leaves of Grass, 1855)


I walk along the beach and smell the salt air
While Midwest soil
Makes my heart-sack boil--
With longing for wronging to bare?...
(Walk2Write, 5-14-2013)
It may be that I've waited too long to write about a recent turf-grass field trip to WFREC in Jay. I think the simple words that were forming about my impressions got lost somewhere along the road to Illinois and then back again to Florida. 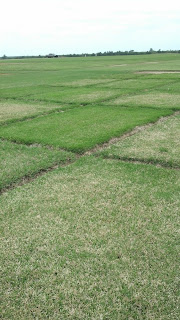 
I wanted to write something easy to read, something "out of hopeful green stuff woven," but the checkerboard plots of different grasses being trialed remind me of people I have known and will know.

They grow. They struggle. They reach for light while their stolon-like efforts at reaching out to the world get stifled. Trouble comes along. Sickness, pain, soul-drought, attacks, and setbacks follow. Weeds take over. Truth rings hollow--no longer filtered by a healthy root system. It washes away and takes nutrient-rich, toiled-for soil with it.

Nearby streams will grow turbid with dreams of a better life washed away in a flash flood of dashed expectations. 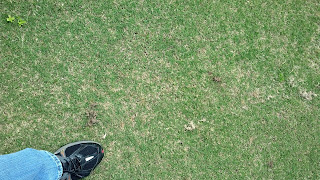 Then, something hopeful happens. Someone comes along and tends the leanness, the meanness of the soil. It is amended. Healing earthworms move in, leaving their castings behind them, cleaning the wounded, bruised, and battered dirt.
And the grass grows and grows and grows, making rich the soil again, supporting trees and life and filtering. Truth again. 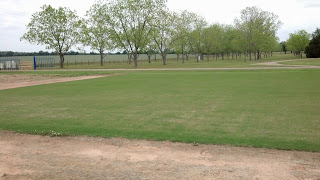 "I guess it is the handkerchief of the Lord,
A scented gift and remembrancer designedly dropped,
Bearing the owner's name someway in the corners, that we may see and
Remark, and say Whose?" (Leaves of Grass)  ﻿
Posted by walk2write at 09:19 7 comments: Links to this post