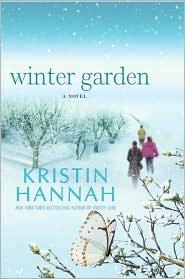 In Kristin Hannah's Winter Garden, silence is as much a part of the landscape as its dormant apple trees and "whitened landscape [that] caused a kind of winter blindness." Silence threatens to split a family apart when its patriarch succumbs to heart disease early in the story. The two adult daughters and their elderly mother who are left with an orchard business and each other to care for discover that leaving things left unspoken can have lasting if not tragic consequences. Heart disease, indeed.
Meredith, the oldest of the two sisters, discovers early on--at the age of 12--"the empty spaces that gathered between people." Family members can live together for years and not know each other. What does it take for a tragedy like that to be averted or at least mitigated? The telling of a story--one that begins as a fairy tale and ends as a family history. That fairy tale, though, must be coaxed from their widowed mother by daughters who reveal their damage in typical fashion:
Meredith is a workaholic whose love for her husband threatens to be consumed by the orchard business she's inherited. Her marriage devolves into a series of gestures and one-liners:
Jeff shook his head. It was a minute gesture, barely even a movement, but she saw it. She had always been attuned to him, and lately their mutual disappointments seemed to create sound, like a high-pitched whistle that only she could hear.
"What?" she said.
"Nothing."
"You didn't shake your head over nothing. What's the matter?"
"I just asked you something."
"I didn't hear you. Ask me again."
"It doesn't matter."
"Fine."
Sister Nina travels the world as a famous photojournalist, recording the effects of famines, natural disasters, and genocide. Many of the images she captures tell of unspeakable horror, letting her--and the millions of people who will ultimately view her work--maintain a safe distance from it all:
Changing cameras, adjusting lenses, checking the light. Her adrenaline kicked in. It was the only time she ever really felt alive, when she was taking pictures. Her eye was her great gift; that and her ability to separate from what was going on around her. You couldn't have one without the other. To be a great photographer you had to see first and feel later.
Emotion delayed becomes a way of life for the three women at the center of this novel. Their only hope of sticking together as a family after the glue dissolves--patriarch dies--lies in the truth of their mother's past. It must be spoken to be understood. The daughters will hear the voice of a survivor, someone who lived through a terrible time in Russia's history. Fear of reprisal then and crushing judgment now has rendered the mother incapable of telling her daughters what happened to her and the family she left behind. The fairy tale she has always told them in the dark before bed while they were growing up becomes the vehicle that will carry them forward to reconciliation and understanding.
﻿﻿﻿﻿﻿ ﻿﻿﻿﻿﻿When I was growing up, it didn't take much coaxing to get my dad to tell a story about his past. Trouble was, I couldn't remember details. I'm more of a visual learner. Words need to be in print for me. That way I can come back to them anytime I want and share the details exactly as they were written.

In 2001, after years of needling him to write it all down, my dad finally recorded, two-finger method on an old manual typewriter--he didn't own a computer--his story. He agreed to let me "process the words" and create a document so that all members of the family could have a copy. We had a family reunion that year, and I still recall how glad my dad was to have us all together at once, his Memories fresh in our minds.


My father grew up in a place that was claimed by various occupiers for periods of time: Russians, Austrians, Italians, Germans, and Hungarians. Here is a hint of what the climate was like when he was growing up:

Since that part of the world is at about the same latitude as North Dakota, the winters were quite severe, with snow covering the ground from the middle of November until the end of March. To get around in the winter, one either walked or used horse-drawn sleds; when the ground was free of snow, to get from one place to another, one used horse-drawn carriages and wagons to move freight and people. Automobiles were very scarce, so much so that children would run out to the gate of their yard to gape at passing cars.

A bygone era, certainly, but not forgotten, and family was always the center of attention in my dad's telling of it. He didn't have any siblings. His cousins were his playmates, and his tomboyish aunt Veronica became his best friend:

She taught me how to whistle on my fingers, how to construct a slingshot, how to whittle my own toy flute out of a willow branch, how to throw rocks for both distance and accuracy; in short, she taught me all that a boy needed to know.
﻿ Her greatest gift to me, however, was her ability to tell fairy tales. Since there were no mechanical or electronic means to amuse people--particularly children--no TV or radio or phonographs, reliance to entertain children was placed on either reading to them or telling them stories. And what stories that aunt of mine could tell! She had a never-ending supply of tales to tell; she knew all of the Grimm brothers' fairy tales; she was familiar with Russian legends and could recite them at the drop of a hat. She could easily have taken the place of Sheherezade, the girl in the tales of the One-Thousand-and-One-Nights.﻿
﻿ ﻿ Certainly, there were newspapers, even in those days. My dad walked into town each Saturday to purchase one. At one point, it began to carry news of Hitler's incursion into Poland and the French and British resistance to this threat to their existence. Nothing in the newspaper indicated any danger to my dad's way of life. Nevertheless, he noticed something strange happening:

It was a week or so into September that I saw on my way to school more and more bicyclists--by the hundreds--streaming south and just about clogging the main roads, from early morning well into the night. Most of them were young men of military age fleeing Poland and on their way west to France and eventually to England by way of Yugoslavia and Greece, to join the western powers in the fight against Germany, we later found out.

We continued to be relatively unaffected by events outside our immediate experience, at least in my point of view, through the end of the war in Poland and that country's partition between Germany and the Soviet Union, and for the first part of the following year. It was therefore a tremendous shock to us all when the Soviet armies invaded our part of Romania on June 28, 1940...The invaders' arrival brought profound changes in all of our lives, uprooting us from our homes and precipitating the breakup of our families.
﻿ From what﻿ I gather in my dad's text, perhaps the worst part of the invasion was its element of surprise. There was no time to prepare:

For all practical purposes, we were kept in the dark by our authority figures, who--I am guessing--feared panic and civil disorder more than they objected to the loss of some territory. Perhaps they just reasoned that since they could not prevail against the Soviets, they might as well not make a fuss about it.

﻿ Like most people, I was excited, bewildered, and apprehensive experiencing all the changes brought about by the Soviets' arrival. Perhaps the deepest impression on me was the upheaval of the familiar social order. The mayor was the first victim of the ensuing "cleansing." He was an ethnic Pole, named Adolf K--, a full-time butcher and dealer in meats and part-time city official; while not exactly beloved, he was highly respected by all and did both his jobs to most people's satisfaction.

Suddenly, some individuals started calling him "an exploiter of the working class," with no clearly discernible reason for this label; he and three of the four doctors who lived and practiced in Sadagura disappeared overnight, as did all three attorneys, several teachers, and other people considered to be community leaders. Rumors were bruited about that they had all been "oppressors of the proletariat" and that they had been arrested for their own good; they were to be re-educated in some Russian camps and be made to once again recognize their duties and responsibilities to the state and to their fellow citizens.﻿

﻿
A pall of almost palpable fear spread among the town's people, primarily because the loudest of denouncers were formerly considered to be dregs of society: drunks, jail birds, shiftless opportunists; they suddenly became organizers of rallies in support of the invaders and were bent on what they alleged was "righting the wrongs" committed by "blood suckers," "kulaks," and "exploiters of the working classes," meaning the previous owners of businesses, farms, and other assets, regardless of their ethnic origins or religious affiliations.

The spreading of news about the arrests/disappearances of people was by word-of-mouth, not very loudly or at great detail, for fear of being considered counterrevolutionary. One never knew whom to trust, whether what one heard was the truth or another rumor...
﻿ ﻿ Winter Garden, you see, made a big impression on me, even though it's fiction. Its story within a story is typical of what life is like for people everywhere. An older generation's experiences should not be dismissed or forgotten simply because we are constantly being told to "move forward." It's never good to keep silent and still about the past. Memories and stories do matter, or at least they should.
﻿
Are you doing anything to encourage people to tell their stories? Are you helping to preserve them in some way?
Posted by walk2write at 10:59