NN/SOTS: First to Be Last 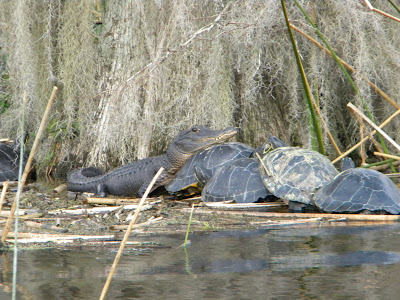 Much Madness is divinest Sense--
To a discerning Eye--
Much Sense--the starkest Madness--
'Tis the Majority
In this, as All, prevail--
Assent--and you are sane--
Demur--you're straightway dangerous--
And handled with a Chain--
(a poem by Emily Dickinson, c. 1862) 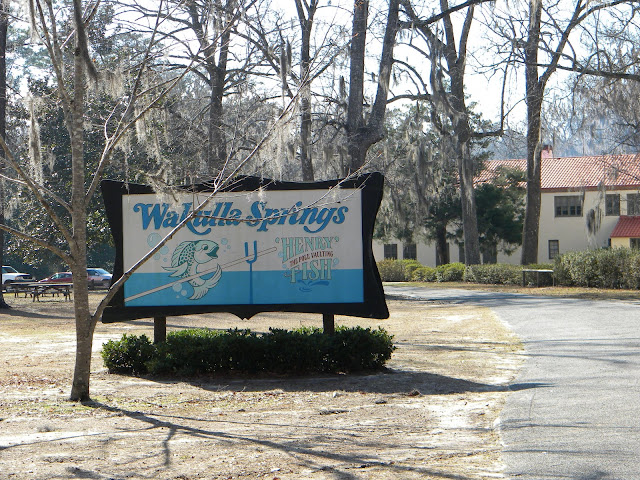 SAM the doughy-butt bureaucrat--that's what he calls himself now--and I needed some serious recreation, and we found it last Saturday at Wakulla Springs, south of Tallahassee. After visiting the lodge and walking the grounds for a while, we waited with several other people on the dock where some pontoon boats were tied up, ready to take the next scheduled tour. SAM was sprawled out in a corner, trying to catch a few rays while I stayed busy with the camera. We were not paying any attention to how the small group of people had suddenly swelled to a crowd of about forty people and also to how a line was forming in response to one of the ranger-guides stepping into one of the boats. Then I heard a kid yell to his parents, "Hurry up, guys, I'm up here. We're gonna get the best seats!" SAM grabbed my arm and pulled me to the end of the line, not looking at all pleased. "Relax," I told him. Somehow I knew that my favorite maxim would come through for us again. As the French like to say: Le premier sera le dernier! And vice versa, don't you know? 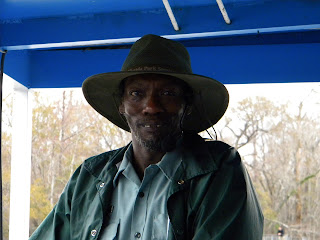 A second boat and guide were added to accommodate the end-of-the-liners. We knew that we had found the mother-lode with this man. He introduced himself as Luke and proceeded to tell us, "This ain't no Disney World! This is the reeeaalll Florida!" I wish that I had taken video of him while he explained various aspects and highlights of the tour, but I was too busy trying to capture the various creatures he pointed out to us. 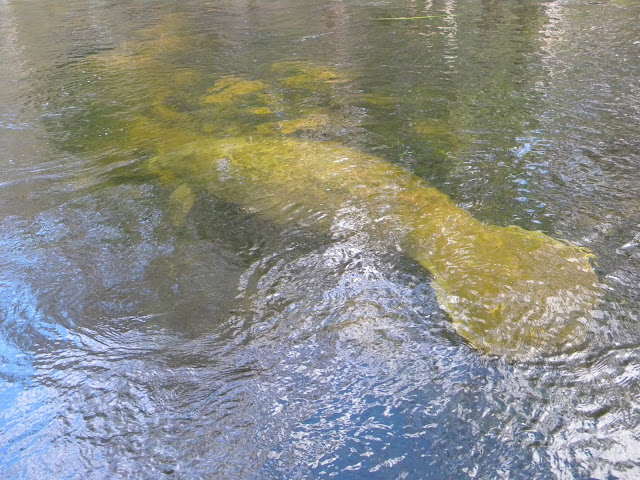 Luke slowed the boat to show us something really special--manatees. He explained that there are several of them living year-round at the Springs. There were actually two of them here when I took the picture, but only one of them surfaced near enough for me to sort-of focus on it. I am not that good at taking rapid-fire shots, the boat was moving ever so slightly, and I might have been just a little excited to see so much wildlife in one place. Most of my pictures did not turn out as well as I would have liked. They're a little fuzzy, but then so are my attempts at French pronunciation. 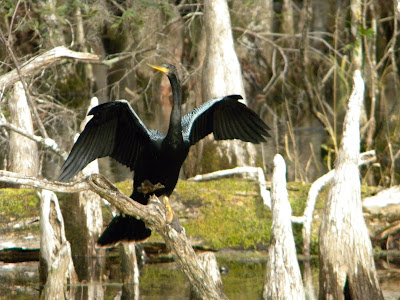 I thought that one of the most fascinating and mobile birds we encountered was the Anhinga. It always seems to be hanging itself out to dry. 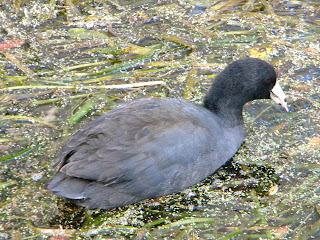 The book I used to identify the birds once I got home--Luke knew them all, but I could not recall--the Reader's Digest Book of North American Birds, remarks that coots will swim over to join ducks or other waterfowl and perform pirouettes while stabbing at the water with their beaks. This strange dance is not for entertainment but to take advantage of the food stirred up by the other birds' feet as they paddle about. Their behavior is referred to as commensal feeding. I wonder if the coots also somehow know my favorite maxim.
Please visit Ramblingwoods.com for more of this week's posts linked to her Nature Notes/Signs of the Season meme.
Posted by walk2write at 01:38